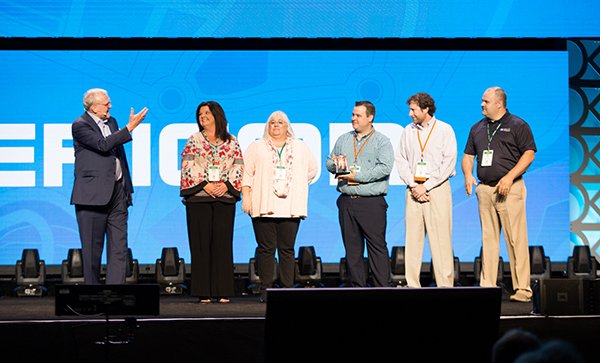 I recently returned from Nashville, where I attended the Epicor Insights conference. For those who are not familiar with it or who haven’t been before, it is a good size event as these conferences go. I believe about 3500 users, customers, and prospects attended the event. If memory serves, there were also about 450 people from Epicor on site as well. I thought that was a good ratio as far as accessibility to people goes.

This year, a couple of interesting things happened. First and foremost, I was so proud of our team for winning a CustomerExcellence award in the category of Business Transformation. So a big shout out for the crew at Birmingham Fastener. The project that this award was about was a far reaching one in the Distribution Center. There were many hard working folks involved who made it happen.

The other thing that I experienced which I thought was definitely worth the time was the track I was invited to called the “Executive Leadership Summit”. This track was very different than anything I had previously experienced at an ERP conference. The content of the track centered on the 50,000 foot view of business and how it is being affected by digital transformation, up to and including narrowing down exactly what that turn of phrase means. There were several sessions that I really enjoyed, but the ones that stick out as particularly valuable were:

Overall, I would say that the ELS track was definitely worth the time. It was set up in such a way that the executive sessions did not take up the whole day. This left plenty of time to visit with others or attend some of the other sessions. If you are invited to attend this track at a future Insights conference, I highly recommend it. I think you’ll be pleased with the content.