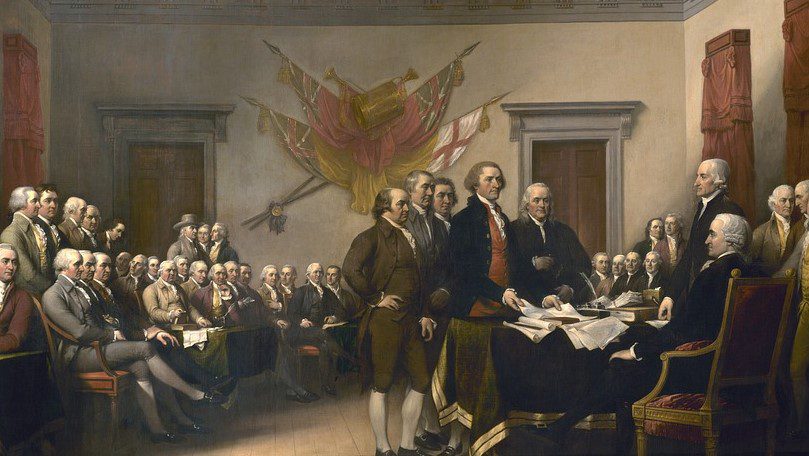 Leadership: 10 Quotes from the Founding Fathers

This week, we celebrate Independence Day.  It has been 241 years since the signing of the Declaration of Independence.  The Founding Fathers had to exercise leadership and courage, often at great risk to their lives.  As we remember this important day, below are 10 quotes about character, business, and leadership straight from the Founders themselves.

Leadership through Self Improvement

“I read, I study, I examine, I listen, I think, and out of all that I try to form an idea into which I put as much common sense as I can.”  -Marquis de Lafayette

Not strictly thought of as a Founding Father, Lafayette was, without exception, an ardent patriot.  French aristocrat Gilbert du Motier, the Marquis de Lafayette, fought his first battle at Brandywine in 1777.  He was close friends with George Washington and even named a child after the great General and first President of the United States.  Lafayette was widely recognized for his leadership, his position on human rights, and his ideas on liberty for all mankind.

Lafayette was not the only Founder to put a high value on self study and self improvement.  Founding Father and eventual U.S. President James Madison was also a staunch believer in gaining knowledge.

Knowledge will forever govern ignorance; and a people who mean to be their own governors must arm themselves with the power which knowledge gives. -James Madison

“Facts are stubborn things; and whatever may be our wishes, our inclinations, or the dictates of our passions, they cannot alter the state of facts and evidence.”  -John Adams

Being Transparent is a Better Leadership Style 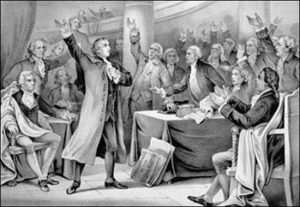 Even in the early days of our country, leaders knew that it was better to be open and honest.  Operating with a hidden agenda erodes trust. This weighs on an organization like an anchor.   Best known for his statement “Give me liberty or give me death”, Patrick Henry also had some insights about the importance of being open and honest:

The liberties of a people never were, nor ever will be, secure, when the transactions of their rulers may be concealed from them.  – Patrick Henry

Change and the Status Quo

Change Management as a phrase came into popular use in the 1980’s.  However, the concepts have been a part of the human condition for an eternity.  Getting people to do something other than the status quo is always a challenge.    Alexander Hamilton, the first Secretary of the Treasury, was known as the founder of the American financial system.  He also gave us an interesting thought about why some people resist change.  This is worth remembering since, as leaders, we must endeavor to be objective and keep an open mind.

Men often oppose a thing merely because they have had no agency in planning it, or because it may have been planned by those whom they dislike. -Alexander Hamilton

Best known as the author of “Common Sense”, Thomas Paine had very deep beliefs about what he felt was right and wrong on the subject of tyranny and governance.  He also gave the world a great quote that can remind those in the leadership that the status quo can be dangerous. We must remember that “the way we have always done it”, is not necessarily the best way to keep doing it.

A long habit of not thinking a thing wrong gives it a superficial appearance of being right.  -Thomas Paine

Great leaders understand that influencing others is of high importance.   Being able to work with other people and get everyone heading in the same direction can be the most challenging aspect of leadership.  This was especially true in Colonial times.  We can easily recognize the importance of influence and getting along in matters of politics and the shaping of a nation.  One of our Founders also recognized that this is important in business as well.  Best know for his large signature on the Declaration of Independence, John Hancock said the following about influence:

The greatest ability in business is to get along with others and to influence their actions. – John Hancock

Standing on Principle and Having Character

I often talk to new managers about the importance of living the core values at the company.  What a company does and what a company is are two vastly different concepts in my mind.  I think you have to be fluid or flexible about the business model.  Business evolves and good leadership requires that the company evolve along with the world.   That said, one cannot be flexible about core values.  These are the concepts that guide your decision making and the way you treat people.  If you are flexible on those things, you can find yourself on a slippery slope very quickly.   Thomas Jefferson was quoted as saying something very similar:

In matters of style, swim with the current; in matters of principle, stand like a rock. – Thomas Jefferson

Thomas Jefferson was not alone in his feelings about principle and the importance of moral character.   George Washington, General of the American Revolution and first President of the United States, also had very strong beliefs about the importance of character.  To his nephew, the man known as the “father of our country” once said:

…a good moral character is the first essential in a man…It is therefore highly important that you should endeavor not only to be learned but virtuous. – George Washington

Humility is not a Weakness 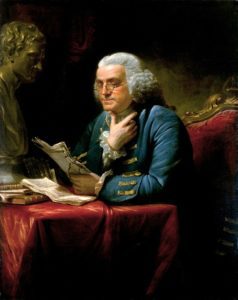 There is nothing wrong with having some measure of humility as a leader.  In fact, it is one of the traits of leadership that I think deserves more attention and study.  Too often, the leadership of an organization lacks the humility to admit when something is not working.  Pride of ownership often carries a project or idea much farther than the objective mind otherwise allows.  Inventor and statesman Benjamin Franklin also had something to say on this subject:

How few there are who have courage enough to own their faults, or resolution enough to mend them. – Benjamin Franklin

Leadership traits that work are timeless.  The principles and values of good leaders during the American Revolution are also useful today.  In any facet of life, business, politics or other activity, these ideas tend lead to the best results for everyone.  Our Founding Fathers knew this to be true.  We should also all hope to be able to live up to the same standards in our lives.